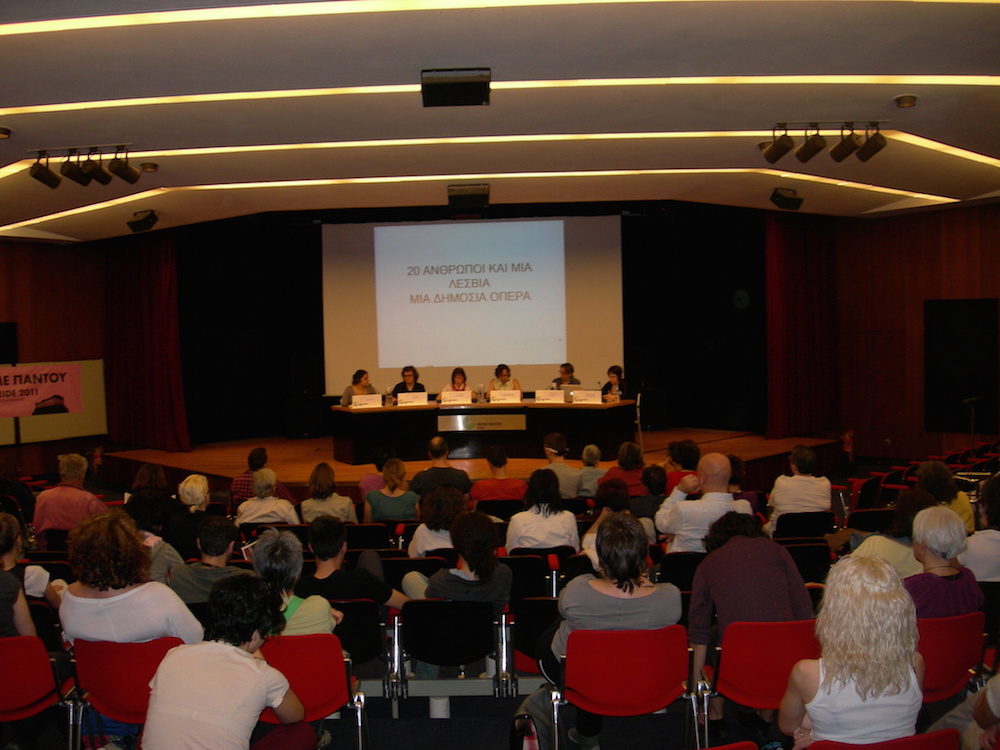 20 People and One Lesbian. A Public Opera

Tsampazi lives and works in Berlin. Through performances, interventions and video-based works, Chryssa Tsampazi creates situations that expose the contradictions of particular economic, social and political dynamics of a location, often in relationship to identity, gender and class.

In “20 People…” a group of 21 people will stand in a line for two hours, chanting in unison with brief intervals of silence. The participants/conspirators (together with the artist and the public) constitute both the subject and the transmitter of the work. Through an open call, Tsampazi collaborated with 20 people to construct a collective public spectacle that is a “chorus” of Athenian citizens. The concept of the action is related to the role of the chorus in ancient Greek theater, which represents both public opinion as well as the un/conscious desires of the protagonist. But in Tsampazi’s hands, traditional notions of the protagonist have been displaced by the dynamic between speakers and listeners, and the communication between the artist and the public.

Tsampazi graduated from the Athens School of Dramatic Arts and holds an MFA in Performance from The School of the Art Institute of Chicago. She has presented works in Chicago, New York, Athens and Berlin.

Join us immediately afterward at 7.30 pm for “Private & Public. Lesbians on the Social Stage,” with films and discussion at nearby Goethe-Institut, 14-16 Omirou St.

Here we will discuss our impressions and conclusions of the performance. What is it like to publicly state “I am a lesbian” – regardless of whether you are or not – in a busy street in central Athens? What were the reactions of the unprepared, random passersby? We will examine other current issues such as Lesbian Performance Art, the body as a political arena, as well as the negotiation of the personal and the social space between the public presence and the private life of today’s lesbians in Athens and elsewhere.

With moderator Isabella Konstantinidou, member of the Lesbian Group of Athens (LOA), guest speakers from Greece and abroad will be:

Based in Lebanon, Meem is a private community of lesbian, bisexual and queer women, transgender persons, and women questioning their sexual orientation or gender identity. Meem creates a safe space where they can meet and work on improving their lives.