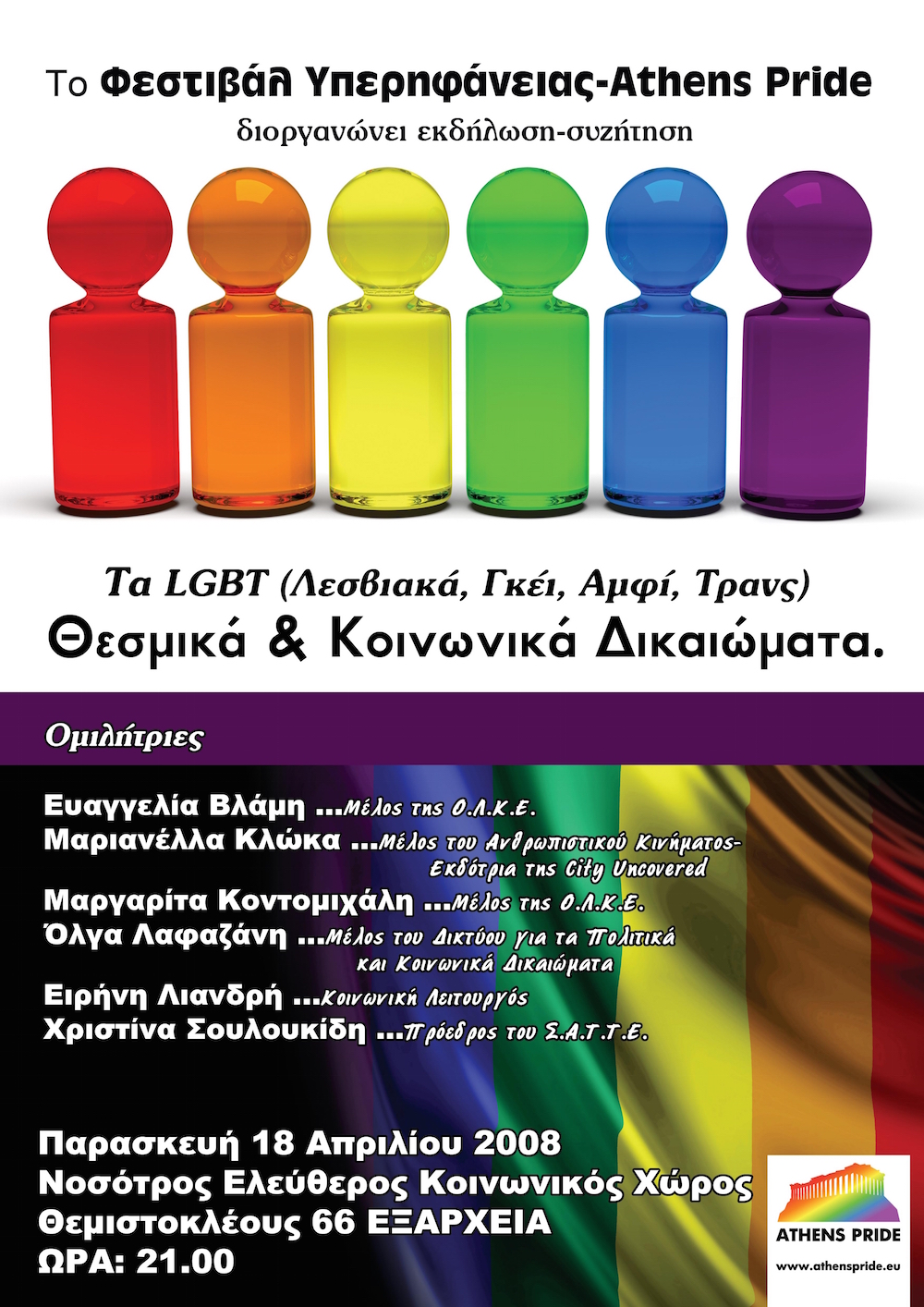 A Visual History of Queer Life & Activism in Greece through

In conjunction with Athens Pride 2008

“Istoria mou, amartia mou…” (My story, my sin)* is the first exhibition of its kind. Its aim is to draw a historical picture – albeit spasmodic – of the largely underground but hardly insignificant LGBT community in Greece through archival material and ephemera. Much of the material in the exhibition is rare or unique, and has been culled from a number of private sources including journalists, activists and artists. Although the “Delfys” Women’s Archive contains substantial material and a lesbian project is underway, at present there is no complete, organized LGBT archive in Greece.

The exhibition has a visual orientation. It focuses on posters, magazine covers, handbills, flyers, photographs, and objects that not only portray the social and political climate of the day, but also reflect its aesthetics. The material features early Pride events and gatherings, AIDS awareness campaigns, political demonstrations, landmark publications such as Kraximo, Amfi and Labrys, a collection of anonymous vintage photographs, and other memorabilia.

In addition, “Istoria mou, amartia mou…” will be accompanied by archival film footage of historical Pride events in New York and elsewhere, projected on a large screen in the atrium, outside the gallery. A party is planned for the opening reception.

Andrea Gilbert is a New York art critic and curator living and working in Athens since 1989. She has curated major international group exhibitions (SKIN, Deste Foundation; Magic, vamiali’s gallery) and numerous solo shows. Her essays and reviews have been widely published in catalogues and in the Greek and foreign press. She currently writes the regular art page in City Uncovered, the fortnightly Greek LGBT free paper.

In tandem to her art career, Ms. Gilbert is also a prominent LGBT and Jewish activist.

She is the Greek Helsinki Monitor specialist on anti-Semitism, and has been the initial civil claimant in several anti-Semitism cases including the recent, landmark Plevris trial. She has been involved in the Athens Pride organization since its inception in 2005, and has been a principal organizer of the 2006, 2007 and 2008 Athens Pride events.

* Opening line of the immensely popular Greek song, “Istoria mou” (1973), written by Giorgos Magnisalis and made famous by Rita Sakellariou.

The exhibition “Istoria mou, amartia mou…” is being held in conjunction with Athens Pride 2008. 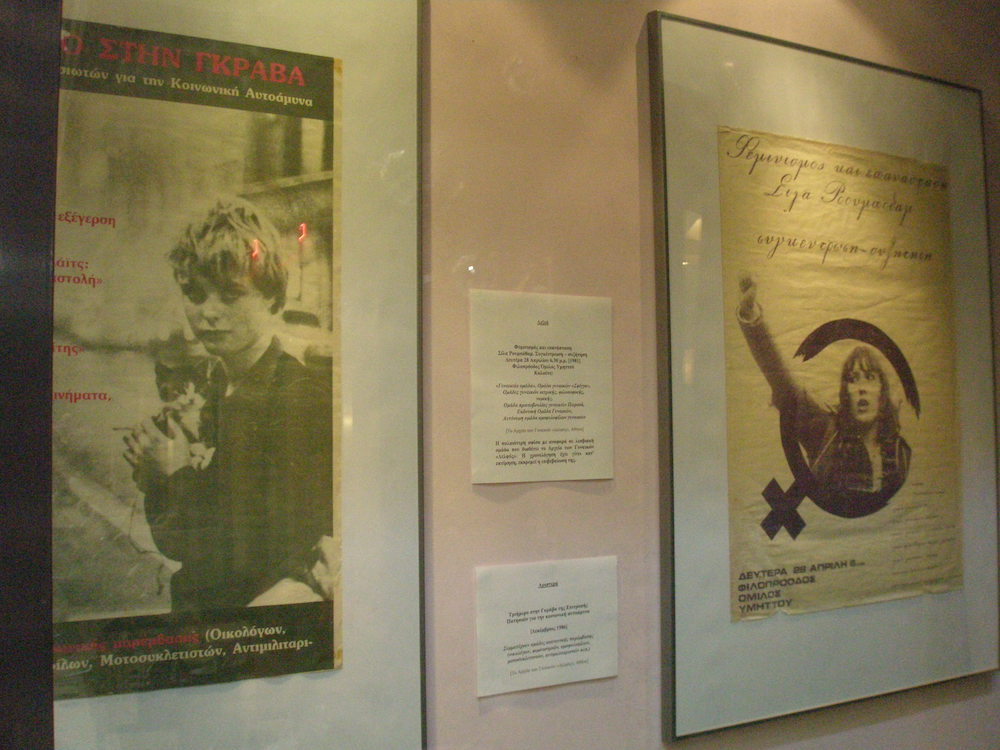 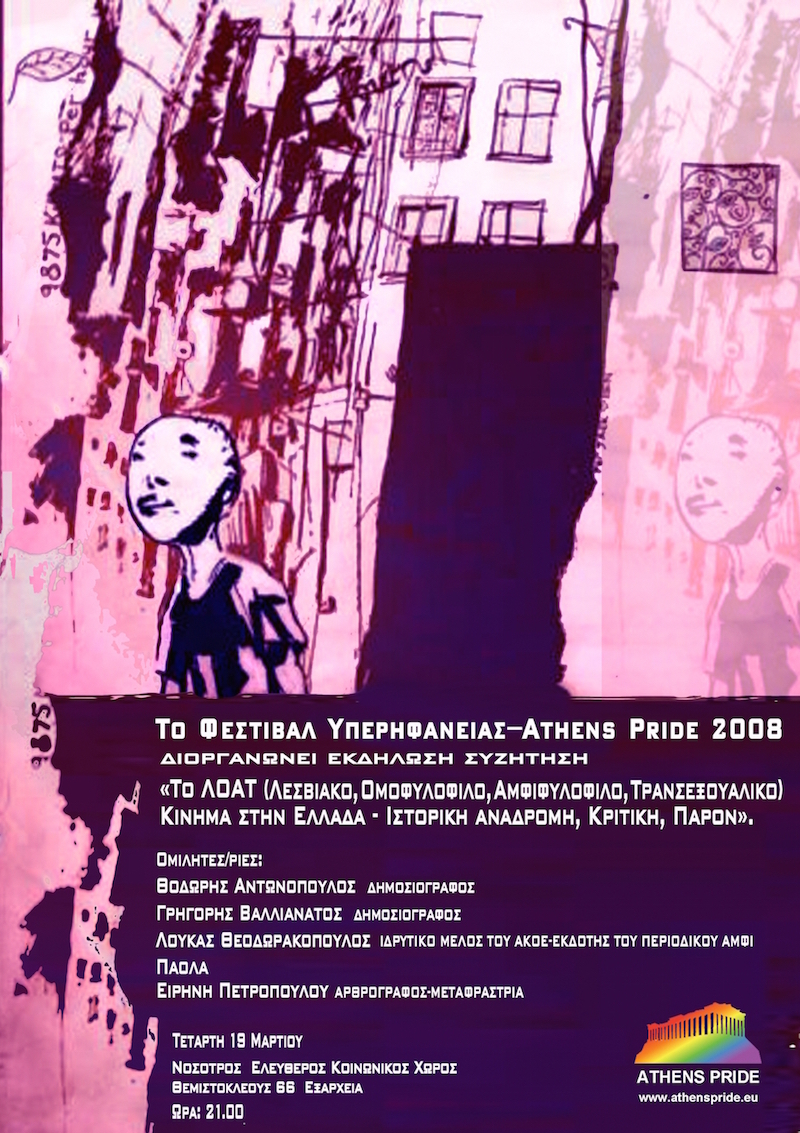