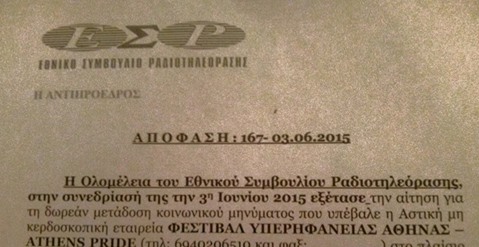 For the first time the Plenary Session of the Hellenic Radio &Television Council approved the Athens Pride TV spot for broadcast on the country’s television networks.

This is a landmark decision as it is the first time that Council acknowledged that the visibility and rights of the Greek LGBTQI community constitute a social message.

The decision, moreover, sets a precedent for the broadcasting of TV spots produced other legally registered Greek LGBTQI organizations.

The four years of hard, frustrating work on the part of Athens Pride have finally paid off. We are proud of this victory.

Nonetheless, our road to equality and social justice remains a long one.