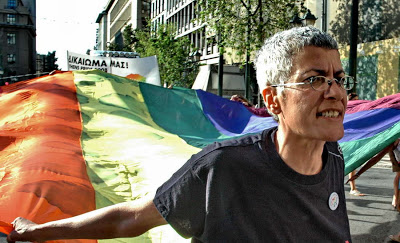 Evangelia Vlami was a valiant LGBT activist. She was at the forefront of every struggle, in legal battles, in the courtroom, in the streets, fighting every manifestation of homoerophobia (her term). Evangelia served on the Board of the Gay and Lesbian Community of Greece (OLKE); she was the founder of the NGO Lesb.Equal Lesbians for Equality; and was half of the lesbian couple in the landmark Tilos marriages. She was a founding member of Athens Pride, and in most of the Pride parades she was seen marching beside the Rainbow Flag. And this is where she will be remembered this year as well: alongside the Rainbow Flag, waving as proudly as the life she lived among us. May her memory and her work be an inspiration to us all.