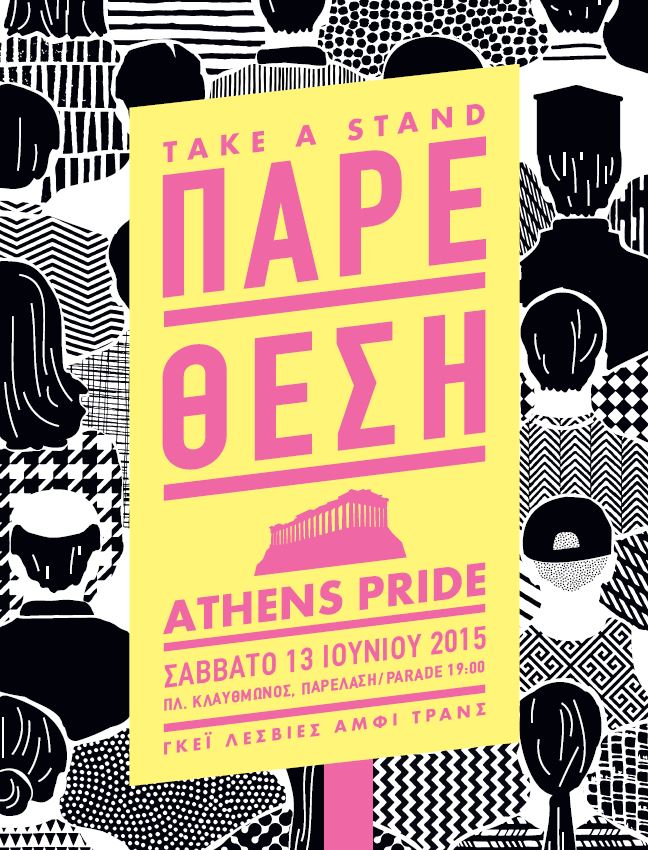 With the slogan TAKE A STAND, Athens Pride 2015 takes a stand for 100% equality, justice, acceptance, and respect for lesbians, gays, bisexual and trans people (LGBT), as well as for every member of Greek society. In protest, we take a stand against all manifestations of hate, discrimination, and violence.

Athens Pride is a celebration. However, the Parade it is also a powerful political act, whose message is conveyed through placards and banners. In this year’s poster, the placard-slogan imposes itself on a representative assembly of Greek society, which turns its back in ignorance, indifference, or in outright objection to equal rights for LGBT people in Greece. In their faceless uniformity, these figures recall the iconic “little people” in the paintings of Yannis Gaïtis (1923-1984) through which the artist formulated a caustic sociopolitical criticism of contemporary mass mentality.

Athens Pride asserts the right of all lesbians, gays, bisexual, and trans people to free personal expression, and emphasizes the impact such expression can wield on society through our dynamic participation in the Parade.

We therefore invite every person and every group to take as stand in this year’s Athens Pride Parade on the crucial issues affecting the LGBT community and other vulnerable groups in Greece. Your demand on a placard or banner on Saturday, 13 June 2015 will challenge Greek society and its political, religious, and cultural leaders to take a stand for real democratic change.